I’m going to keep this as a running timeline of thoughts and sources about the Cash Bail problems in Hamblen County and the class action lawsuit that was filed against Hamblen County officials.  Included among those officials is Teresa West, the incumbent Hamblen County Circuit Court Clerk.  She is the Republican candidate and I am her Democratic opponent in the election which will be held on August 4, 2022.
In 2019, Hamblen County reported ZERO releases on recognizance or signature bonds. 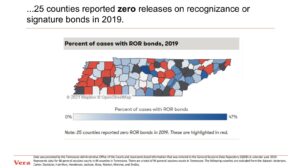 Not surprisingly, in February 2020, a number of Hamblen County officials, including Judge Collins and my opponent in the Circuit Court Clerk race, Teresa West, were named as defendants in a class action lawsuit about the cash bail practices in Hamblen County.  Check out the complaint here.
In November 2020, the judge in that case issued a preliminary injunction wherein he found that the Plaintiffs would likely succeed on the merits of their constitutional claim and enjoined the Sheriff from detaining any criminal defendant unless they have an individualized hearing within a reasonable period of time.
Here’s a video of a Hamblen County Committee meeting on September 13, 2021.  Thanks to the YouTube Channel Lakeway Audits for taking this video.
In this video, Judge Collins is asking the County Commission to fund three full-time and two part-time Judicial Commissioners to help with handling the processing of criminal defendants.  As Judge Collins says in the video, the “magistrates” would be there to sign the warrants and the summons that come in from the officers and then either cite and release the person, maybe use GPS, or set an amount of bail.  Remember, in 2019, Hamblen County did ZERO release on recognizance of criminal defendants, which is the cite and release that Judge Collins is talking about here.
Judge Collins makes reference in his remarks a few times about the “litany of questions that the statute requires” be asked of the defendant.
What Judge Collins is referring to here is TCA 40-11-115, Release on Recognizance or Unsecured Bond – Factors Considered.
This says that “any person charged with a bailable offense may, before a magistrate authorized to admit the person to bail, be ordered released pending trial on the person’s personal recognizance or upon the execution of an unsecured appearance bond in an amount specified by the magistrate.”
It also says making that decision, the magistrate SHALL take into account 8 factors (emphasis mine).  These are:

Remember how I said in 2019 that Hamblen County used this option ZERO times with criminal defendants.

So, I guess it’s no wonder