Thoughts on Pools and Tennis Courts and Community Centers

Here it is the first day of June.  We’ve just passed Memorial Day weekend, which is usually associated with the start of summer.  Kids are out of school.  Pools open for the season.

But not in Hamblen County this year.  The swimming pool at Panther Creek State Park, along with 10 other state park pools, did not reopen this past weekend.

The reason given by the state for not reopening these pools is that “[r}eopening the pools is unfeasible due to aging facilities, declining visitation pre-COVID 19, and high expenses.”  With regard to the pool at Panther Creek, the state has said that, “the pool is 36 years old, visitation is down, lake swimming opportunities exist and a public splashpad is five miles away.”

So, back in December, when this was announced, I attended the “Public Meeting & Open House” that was held at Panther Creek State Park.  The meeting was scheduled to be a discussion of how best to replace the swimming pool located at Panther Creek.  The Park Rangers were there looking for input from the public on how to spend the $400,000 that was being allocated by the state to replace the pool.  At this point, the decision had already been made to close the pools and the only question was if something else would be added to the Park to make up for the loss of a pool.

The attendees at that meeting, however, were of a mind to say that the pool shouldn’t be closed at all.  They (along with many residents of Hamblen County) want to Save the Pool.  The arguments they make are persuasive: The pool is the only public pool in the county.  It’s a draw for campers to the campground at Panther Creek.  The option of swimming in the lake is not an adequate alternative to a public pool.

After the public outcry, Hamblen County and Morristown leaders, along with state Republican elected officials, put some pressure on the Bureau of Parks and Conservation.  In Feburary, it was announced that the plan to close the pool permanently was put on hold until they could conduct a strategic review of the entire park system this year.  They said the review would address the role swimming pools have in the park visitor experience, as well as park operations.  They estimate that the review will take nine months and the earliest the pool will be open is in 2024.

Summer is also a good time for tennis.  Unfortunately, the tennis court situation in Hamblen County is pretty poor as well.  There are eight courts at Frank Lorino park, but they’re all out of commission.  Back in November, Morristown City Council announced they would be spending $240,000 to resurface the courts at Frank Lorino.  As I recall, they described the resurfacing as a short t0 medium term fix, rather than something that would last long term.  It was just last April that the city was pondering moving the courts to accommodate road improvements for development near the park.

How about the recreation that Community centers provide to Hamblen County and Morristown?  Well, the situation there is muddled.  Morristown is building a brand new facility called Morristown Landing.  It seems like a pretty cool facility, although as far as “Community” or “center,” you can’t really say they’ve addressed either of those issues.  It’s got a top notch indoor pool, but that’s gonna cost you a membership.  Great to host swim meets, though.  It’s got top notch hardwood courts, which will also cost you, but at least they’ll be able to host basketball and volleyball tournaments.  Tennis courts, though?  Nope.  Why?  Well, I’ll tell you.  I attended a presentation about the facility last fall and asked about tennis courts.  The answer was they are not “a good return on investment.”

What about the existing community center in Morristown, Talley Ward?  You know the one.  The Recreation Center that is actually in the center of town and is used by the community at little to no cost. Well, it seems last summer there was discussion of selling Talley Ward to the Department of Education, to make the building part of Morristown East High’s campus.  Fortunately, at least for now the Rec Center is still available to the public.

I did a drive around Hamblen County on Memorial day and stopped by both Panther Creek and Frank Lorino.  So I can report that now, at the start of summer, the pool at Panther Creek is, indeed, closed.  They do have two tennis courts over there that seem to be in pretty good shape.  At Frank Lorino, the eight tennis courts there are being resurfaced, so they’re not available to the public.  Talley Ward seems to be doing well, but it’s something I’m watching closely. 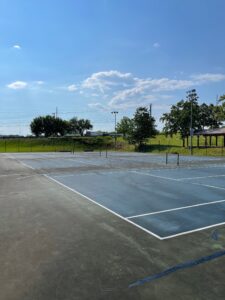 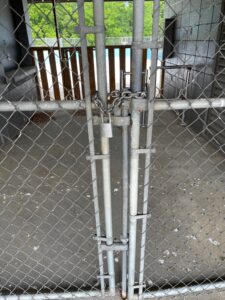 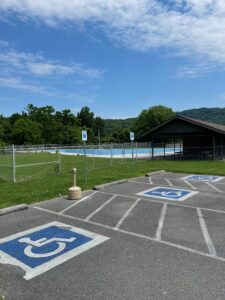 “The swimming pools at these parks require major maintenance upgrades while usage continues to decline. We believe it is unfair to Tennessee taxpayers for the state to continue to invest in these swimming pools with rising costs and declining visitation,” Jim Bryson, deputy commissioner of the Tennessee Department of Environment and Conservation, said. “Fortunately, the Tennessee General Assembly has been very supportive of the parks in recent years, which has allowed us to allocate funding for options that are more fiscally responsible to taxpayers and that visitors can enjoy year-round. We first want to hear from visitors of the parks about what they would prefer and use.”

In addition to the business-like language in that paragraph, I also think back to the meeting with the Morristown Landing guy, who said that tennis courts couldn’t be added to that “Community Center” because it would not be a good return on investment.

Or how about setting up gold and platinum level fees, along with maintenance fees for Morristown Landing?  After this story came out, there was an outcry that may have caused City Council to backtrack a little.  But, as the article says, Mayor Chesney said, “he felt the council was fine with the fee structures.”

So, what’s the bottom line?  Well, if you try to run your state or local government like a business, you end up prioritizing a rainy day fund over spending money that could actually help people.  When you think of community swimming pools, you think of them as an investment, versus something that will benefit the people of a community.  Same with tennis courts.  You don’t build them because they’re not a good return on investment, rather than seeing them as an opportunity to expand recreation opportunities for people of all ages.  Or with community centers.  You build something that can bring revenue to your balance sheet and you ignore the needs of the people in your community.

I do want to add a post script to this piece.  In today’s paper, they did a long piece about the presentation from outgoing Parks Director, Craig Price, to Morristown City Council on May 17th.  Mr. Price presented the Parks and Rec Master Plan.  I got a chance to glance at the Master Plan when I attended the Parks and Rec Board meeting on May 2, but didn’t pay too much attention at the time.  It’s a pretty good article – worth a click.  It gives some pretty good context to the issues I have.  There’s mention of the fact that Talley Ward renovation is on the list and they discuss the renovation of the Frank Lorino tennis courts.  Lack of a public swimming pool in Hamblen County isn’t mentioned.

I want to add that I’m a big proponent of making sure that City Council takes away the interim tag and makes Frankie Cox the permanent new Parks and Rec Director to replace Craig Price.  She’s the best person to lead the Parks Department from here going forward.  I’m going to be watching this hiring process closely.